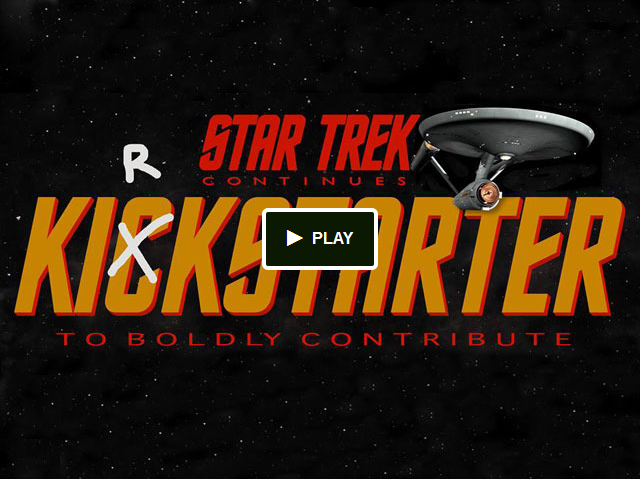 by Far From Home, LLC 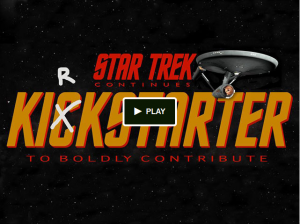 The Star Trek Continues fan-based, non-profit production respectfully and graciously thanks CBS, the holder of the Star Trek rights, for allowing fan-films of this great show! Without their support of the fans’ love of Star Trek then web-based, fan-produced shows like ours would not be possible. Their understanding of the passion that the fans have for their property is second to none and we are so appreciative for their support by allowing this activity.

Star Trek Continues is a non-profit, fan produced webseries that was launched in May 2013 with its first episode, “Pilgrim of Eternity.” The show is being produced to complete the final two years of the original 5-year mission. Our inaugural episode brings back original series guest star, Michael Forest as Apollo. The accuracy of the sets, lighting, filming and the quality acting and characterization brought great praise and support from Star Trek TOS fans all over the world.

We’ve made a first episode that we’re really proud of. Now we want to make more! If we can raise $100k, we can make 3 original, all-new episodes.

We’re not paying ourselves! The money goes to hard costs related to the development, filming, and post-production of these episodes, such as:

• Make up equipment and supplies

• Cast and crew travel, lodging, and food during the shoots

• Plus a million other little details!

If we are fortunate enough to exceed our goal, additional funds will go towards making more and better episodes. We are just getting started! If we exceed $200k, then new production opportunities may open up, such as expansion of our sets and perhaps even our own facility, including an indoor planet surface setting like was so often featured in TOS!

But we’ll cross that bridge if we come to it!

There have been many reviews of our webseries’ inaugural episode, some by the elite of fan-based websites such as TrekMovie.com and io9, among others. Check out some of the reviews here:

In addition to the fan site reviews, many of our fans took the time to reach out to us about our show and they are excited to see more:

“I can see a great deal of love and care went into the production of this web series and I wholeheartedly applaud you for it. To think I can see a continuation of the original series in this fan-made form is pure joy.” – Ozne R.

“I watched with pleasure the first episode some time ago and it stirred a lot of memories.” – Rick B.

“For years I have been jonesin’ for years for new episodes of ANY star trek series. Watching this was an exact experience of a new episode of the original series. Once I got used to the new faces about half way through it was like the original series in every way! We NEED MORE episodes!” – Dean M.

“This episode had me hooked from beginning to end, and I loved that little easter egg at the end.” – Vanessa E.

“You hit absolutely everything right. You matched the style without it feeling dated. You caught the actors and characters spirit without them feeling like impressionists. The story was compelling, meaningful, and in the true spirit of ST:OS…with a kind moral. Fantastic.” – Ryan R.

Hundreds of fans have emailed us, and they all have had similar sentiments as above, regarding the first episode of our series. We have had more than 250,000 views of our episode between Vimeo and Youtube and it is growing every day.

The first episode was shot in January of 2013 at the Farragut Films studio which is the home to the largest, freestanding original series sets in North America. The 10-day shoot was filled with Trek fan passion that created one of the most accurate, modern day portrayals of the original series to date.

Vic has been acting from the age of eight all the way through college where he majored in film and minored in theatre. Vic has been in countless professional stage and film productions but perhaps is best known as a prolific voice actor for over two hundred animated series and video games including Fullmetal Alchemist, Dragonball Z, Pokemon and many more. As a young boy, Vic fell in love with Star Trek and is realizing his boyhood dream to play the role of Captain Kirk.

Todd got his first professional start in stage productions as a boy. He then went on to a degree in theatre from SMU. Being in front of and behind the camera in almost every capacity, Todd is an accomplished actor, director, producer and writer. He works in every medium from animation and film to voice over and theatre. Todd continues to produce with his own company, Out of the Office Productions.

A native of Norman, OK, Larry is author of the best-selling “ST: The Next Generation Companion” and “Star Trek: Stellar Cartography,” with editor/producer credits on Communicator magazine, Star Trek Fact Files, startrek.com and now his column in Star Trek magazine and his own TREKLAND vidchat/blog site. His BA and MA in theatre sparked a host of stage credits, and recently he guest-starred in the “Divine White” webseries nominated for a 2011 LA Comedy Award. Along with story credit for the “Prophecy” episode of Star Trek: Voyager, Larry also shares two Associated Press state news awards, leads the “Hollywood 2 Vegas” Star Trek Tour for Geek Nation Tours, and appears in numerous Trek documentaries while shooting his own, “The Con of Wrath.”

Chris is no stranger to Star Trek. Having spent time on the original series sets with his dad. He began his acting adventure on the Enterprise in 1979 appearing in Star Trek: The Motion Picture. That was the first of several appearances on the beloved ship. His most recent trek put him in the transporter room of the critically acclaimed Star Trek(2009), sharing the screen with the new Scotty, Simon Pegg. Chris has also done several character voice-overs for the Starship Farragut animated episodes, including that of the iconic engineer himself.

Grant is one of the hosts of Discovery Channel’s Mythbusters. Before that, he spent nine years as an animatronics engineer and model maker for George Lucas’s Industrial Light and Magic. Grant worked on many blockbusters including The Matrix sequels,Galaxy Quest, Terminator 3, and Star Wars: Episodes 1-3 (although he is NOT responsible for Jar Jar). He put the lights in R2-D2’s dome and gave the Energizer Bunny his beat. He created the often rude and irreverent robot skeleton sidekick for late night talk show host Craig Ferguson.

Kim has appeared in film, on television, in commercials and on the web. She has had roles on shows like The Bold and the Beautiful, America’s Most Wanted and the films Thunder Geniuses and Pastor Jones 2: Lord, Save My Daughter. Lt. Uhura will be a standout among her roles, not only because of Kim’s respect for Nichelle Nichols who originated the iconic character, but also for the tremendous enthusiasm Trek fans have for Uhura and the entire cast of the classic series.

Wyatt has been acting since he was a child playing roles like Joseph in Joseph and the Amazing Technicolor Dreamcoat, Into The Woods: Rapunzel’s Prince and more. He’s won several classical piano competitions and enjoys composing, singing and playing bass with his band. Wyatt even works as a flight director at the Christa McAuliffe Space Education Center taking young students to distant destinations in the galaxy. He comes from a family of nine where the ultimate family pastime is anything Star Trek.

Steven is an Executive Producer of Star Trek Continues, and is featured in Fallout: Nuka Break, My Gimpy Life, Save the Supers, the Jeff Lewis Five Minute Comedy Hour, Shelf Life, the upcoming Veronica Mars Movie, and more.

As well as portraying Starfleet’s first ever ship’s counselor, Dr. Elise MacKenna in STC, Michele is known to Sci-Fi fans as insane bounty hunter Red in “Fallout: Nuka Break”, and as Betty the Manipulation Core in the Portal-based “Aperture R&D”. Her television work includes roles on “CSI: NY” and “Disney’s “Kickin’ It”, as well as series regular Katie in “I Hate My 30s”. Her feature films include “The Last Godfather” with Harvey Kietel, “Politics of Love” with Loretta Divine, and “The Columbian Connection” with Tom Sizemore. She has also voiced roles in animated films (“Madagascar: Escape to Africa”), animated series (Cartoon Network’s “MAR”), and several popular video games and anime series

Our sets are the largest, freestanding in North America. Our sound studio is a 10,000 square feet warehouse and contains the Bridge, Transporter Room, Rec Room/Mess Hall/Briefing Room, Sickbay, Captain’s Quarters and more. 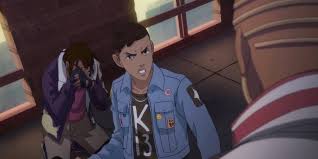 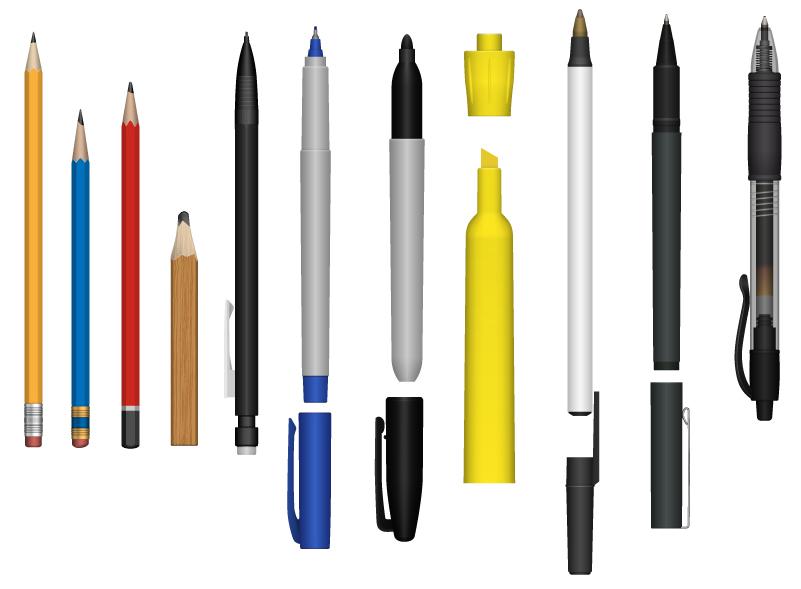