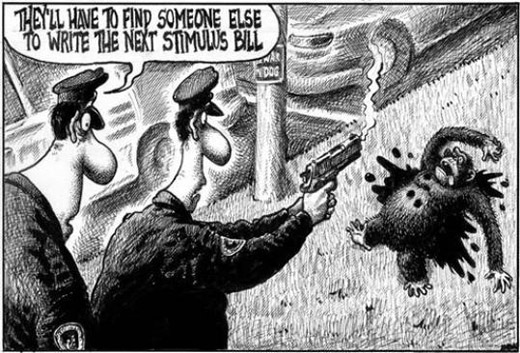 Okay, here we are into a whole new century, a whole new millennium even. We’re ten years into it and for a century that’s still pretty new, but for a millennium, ten years make it practically unborn. If we’re talking about cars, then ten years is ancient, especially for an American made model. I’ve heard people exclaim the year in incredulity when witnessing an act of ignorance that should now be extinct. They’ll say something like, “this is 2009!” They say this as if to express the anxiety of having to deal with something that should have fallen into antiquity, like lynching for instance. I would exclaim the year if I saw strange fruit hanging from the limb of a Cypress tree. I would say, “What the fuck? This is 2009! How can this shit still be happening?” Physical lynching of black people and other unfortunates have fallen into antiquity and should stay there. Never again witnessed but surely never forgotten.

Injustice is like a virus that can morph into other forms and pop up like an atavistic resurgence in the cultural inheritance of new societies among new citizens. Those who want to be unjust will find a way to do it, because hatred is as powerful as the sex drive is in humans and apes. Yes I include the apes because we are talking about lower intelligence and functions of the basic instincts of the sapiens species. The human species is part of that class. For the sake of my argument I won’t be sidetracked into the Intelligent Design versus Darwinism debate. I’m talking about time and ignorance as a virus in the concept of higher intelligence. I’m talking about hatred as a function of our base instincts, inherited from our past.

Hate is very powerful poison. It is infectious, insidious and potent. It can lie beneath the veneer of our social graces and erupt like vomit from any one of us. We all carry some hatred for something, someone, someplace, some time. We even hate hatred. If you put the word hate next to the word love in any juxtaposition, hate always wins. Try it and see. Hate love. Love hate. Even in words, it is a powerful poison. You can hate, hate but you still hate. You can love to hate and hate to love, but to love you must love to love. Hate cannot enter into it. I think this was the fundamental lesson of Christianity. In practice, there are no Christians. It’s impossible for the human species to arrive at the door of spirituality and walk in free of hatred. Even the doctrines of religious belief give its followers permission to hate. You could infer that Jesus gave his followers the permission to hate the rich. Mohammed gave his followers permission to hate the infidels. The whole mess going on with the world is due to hate and its repercussions.

The truth about love is that it hurts too much. Love is a kissing cousin to gratitude. You go around expecting some gratitude and all you get is resentment. Why is that? It’s because people would rather feel resentment than supplicate themselves with gratitude. “So what if you bailed me out, you want, my undying gratitude? I’ll pay you back when I can! Get off my back about it!” Resentment is a kissing cousin of hate.

The only way love could possibly feel good is if there was no hate. Love has to be the only option. Love is alien and not of this world. It used to be, according to biblical apocrypha. When Eve took a bite of that apple and Pandora opened that box all bets were off. Notice how we blame the world’s troubles on women? That’s another blog. But since there is hate, turning the other cheek could get you in a world of hurt.

Besides it feels better to hate. You know how charged up you get when you’re feeling hatred. Your blood boils, your mind races. You feel alive! You may feel like shit later, but while you’re in the throes of a good hate, it’s a rush!

Hatred is a drug that gives you a high that love can’t compete with. Hate is like spiritual cocaine. You snort or smoke some and you instantly feel better than the object of your hatred. Love is a sedative. It excites in a different way. It’s not very physical in its manifestation. Love is almost involuntary and creeps up on you like a psychedelic high. Love is extraterrestrial. Hate is definitely earthbound, a cornerstone of this world. Hate feels real, there’s no questioning the emotion. We’re always unsure of love though, that’s why we need to hear those three little words all the time. Love is invisible while hate is in-your-face ugly. Love is mysterious while hate is blunt. Some of us may never know love, and we hate that. Love is something that you have to be inside of; it has an insular quality. You must be in love because love is not naturally inside of you. Hate on the other hand, lives and  thrives inside. You don’t find your self in hate, or fall into it. We carry its seed. It grows inside of you until it flowers. Maybe that’s what the appendix is for; it’s a hate gland. It’s not good for anything else we can figure. Okay, I’m kidding, but that concept sounded good to me.

Now that we’ve examined human dichotomy let me get to the point. In the New York Post recently there was a “political” cartoon or “politically incorrect” cartoon if you prefer that depicted a chimpanzee. This chimp was shot dead by the police who were standing in the foreground with one of them exclaiming; “They’ll have to find someone else to write the next stimulus bill.”

What does this cartoon mean? The fact that it needs explaining means that it fails as a cartoon. It fails if we are to believe that a picture is worth a thousand words, because here I am trying to make sense of it with words when it should be clear what the cartoonist intended. When it comes to cartoons, I know of where I speak. I’m a published cartoonist as well. I’ve done political cartoons and was paid handsomely for doing it. I was also paid some hatred for doing it too. The hatred came from the targets of my pen; who were usually incumbent politicians. They reacted the same whether they were Chicago politicians or California politicians. No matter where, they don’t like to have their dirt exposed.

When I first saw this Post cartoon, I thought I was in for a funny jibe about Travis the chimp that was gunned down in Connecticut the day before. I don’t know all the details about the lady and her chimp except that the monkey went berserk and the police shot it, no more monkey business. As my mind focuses in on this Post cartoon and I read the caption, I’m met with confusion. For the cartoonist, confusion is anathema to the craft. If your cartoons confuse instead of clarify then you’ve muffed it…perhaps cartooning is not your forte. It wouldn’t be the first time a profession was practiced by a delusional individual. That’s why doctors have the AMA and lawyers have the Bar to keep the delusional out. But the inky profession can let any moron with a pen and an opinion in. I’m not being dismissive here, just pointing out a condition. The editorial and publishing professions should be the arbiters of taste. When a cartoonist goes awry the editors are there to reel them back in. I’ve been edited and didn’t like it. I felt my artistic integrity was at odds with the editor, but that’s the way the ink spills. This didn’t happen in the case of the New York Post and this cartoon.

When it dawned on me that this might be a cartoon depicting Obama as a dead monkey, my mind searched for that phrase, “What the fuck? This is 2009!” Then I started trying to figure out if I was being reactionary and missing the point. It seems after several days of pondering the cartoon that I didn’t miss the point. There is no point. This cartoon seems to be just what it looks like. It looks like a very inept attempt at expressing an idea with a wink and a nod to all those who still want to think of black people as monkeys. I guess if the intent was to draw a racist caricature of our 44th president then it succeeds on those grounds. If the intent was to dredge up old feelings of racial hatred then it does that admirably. The fact that the monkey is dead is a way of lynching the man in effigy.

Since Obama didn’t write the stimulus bill, I assume that this cartoon was created out of ignorance. Ignorance of the fact that the stimulus bill was written by committee, whose members were mostly white if not completely.

I guess you can take the racist out of the past, but you can’t take the past out of the racist. While The New York Post looks backward to those halcyon days of racist yore, the rest of us will look forward to the day when racists are only found in museums, right next to the primate display.

So in summing up the feelings expressed by the New York Post in publishing this cartoon created by a “cartoonist” who didn’t sign the work , I submit this question: So you hate Obama and black people, how important is that?

Please note my caricature of The New York Post. It’s very clear and needs no explanation. This is how us professionals do it, and I’ve signed my work. 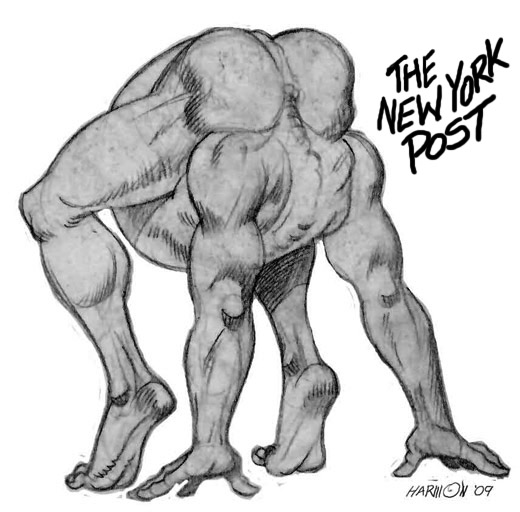 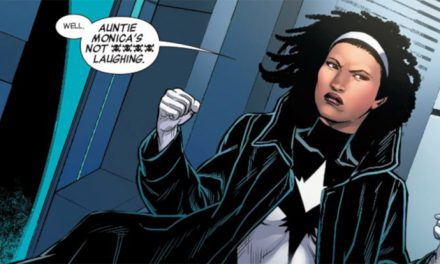 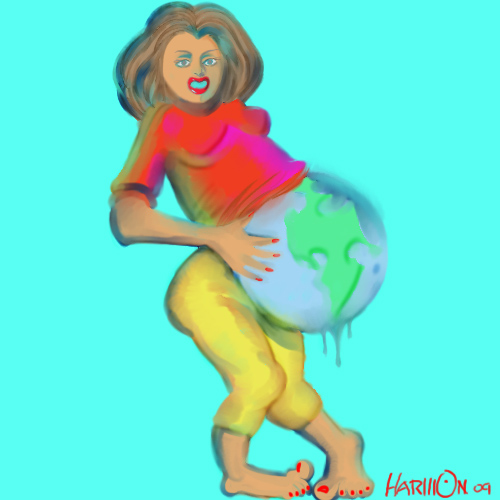